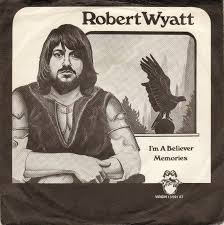 Just been adding some tunes, to my ipod. I’m going to be out of action
for a while. This is one of them, and of course I’ve included his version
of Elvis Costello’s song: Shipbuilding. Robert Wyatt must be one of the
last remaining English eccentrics working in music today .
Here’s a link to his 1974 Top of The Pops performance of the said song.
Apparently the powers that be had problems
with his wheelchair featuring on mainstream TV. Enjoy.

This site uses Akismet to reduce spam. Learn how your comment data is processed.